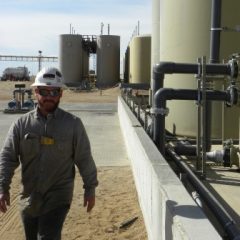 The number of barrels of oil produced from wells in Weld County and across the DJ Basin declined last year compared to the 2015 milestone, but the production drop was not steep and has since leveled off, according to recent figures from the state’s database.

The forecast for this year indicates that steadying prices and increased efficiencies likely means recovering volumes and increased activity in the coming months, say industry analysts.

Among the leading companies in the area, most continue to post strong numbers and indicate continued interest in growth and development.