Losing ground in the split estate 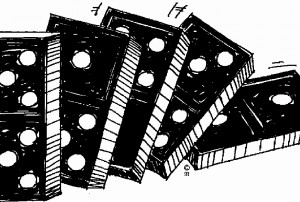 At a news conference in the Colorado State Capitol on Feb. 25, Gov. John Hickenlooper acknowledged that the concerns of mineral owners and surface property owners are often in opposition. Fresh from the Air Quality Control Commission’s adoption of unprecedented new rules on emissions at oil and natural gas operations, the governor said negotiations leading up to the air emission rules were difficult, but compromise between the two sides of a split estate may be the most difficult of all.

“Both have valid concerns and compromise will be hard, but we have to if we are to move forward,” Hickenlooper said.

For oil & gas operators in Colorado, compromise is something they’ve gotten used to. For most of the past decade, companies have ceded positions on regulations time and again and gotten little from the opposition in return. Lately, companies and their surrogates in Colorado are forced to accept costly, overreaching new regulations and to applaud the thumping that comes with it. To do otherwise is to risk being cast as a villain in the opposition’s Kubuki theater of righteous causes.

Ironing out thorny issues requires the involvement of all three legs of the stool, the governor said. “Government, business and general society have to trust each other to work together, and in cases like this, society is represented by non-government organizations,” he said.

Later in the news conference, representatives of two such non-government organizations, the Environmental Defense Fund and Conservation Colorado, called the new regulations “a victory” but that they don’t go far enough and “all emissions from oil and gas must be controlled.” It would seem that enough is never enough, even though the air above Colorado “is cleaner than since before fracking,” according to the governor.

When the governor was asked how a statewide program to reduce ozone pollution, including the parts of the state that don’t have a problem with ozone pollution, how that squares with his opposition to local governments pushing local control of oil and gas development, Hickenlooper said the comparison wasn’t fair.

“People across the state told us ‘don’t leave us with dirty air’,” he said, “so we went statewide. But there are some who want to ban use of all hydrocarbons and they won’t be satisfied until they are. That’s not going to happen.”

Local bans on oil and gas threaten the property rights of mineral holders, Hickenlooper said, adding that he’s heard from mineral rights holders whose retirement plans rely on the resource being developed, but now face hardship since their minerals are off limits. Surface owners elect political leaders who block development, but “there are no elections for people who own mineral rights.”

Such concerns matter little to the professionals in the business of opposition to oil and gas. “Yes, these are good rules, and everyone deserves a pat on the back for that,” Elise Jones, a career opponent and current Boulder County commissioner, told the Denver Post.  “But this does not change the fact that communities across Colorado want a say in whether or not industrial oil and gas activity can happen.”

We appear headed toward a day when “having a say” means that it’s okay to force others to forfeit their property without compensation or even a valid reason for doing so.