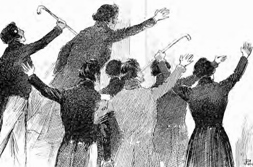 The use of outrage as an instrument of opposition in a public forum has been around as long as people have disagreed with each other. One side has a plan to do something and the other is against it. The opponents may not be sure why but they believe the plan is wrong and must be stopped, or at least delayed for awhile. So, what to do? Often, just show outrage and let the fence sitters come around. If you don’t like the way the things are going, you stand up and bluster and blab and get red in the face. Might work and it might not. The downside is that displays of outrage are like the boy who cried wolf: after several such tantrums, fewer people believe it and then, most of the other stuff said is increasingly discounted.

But the first time around, righteous indignation, especially when organized among the like-minded, can be quite effective in swaying a position one way or the other. Opposition to oil and natural gas development along Colorado’s Front Range is a good example. Since development of and reactionary opposition to the Niobrara formation began in earnest in 2010, the outrage card has been played again and again as a means of grabbing headlines and getting out the vote.

Recently, Patty Limerick, who heads up the Center for the American West at UC Boulder, wrote an op-ed piece for the Denver Post that observes how outrage has become an integral part of the debate around fracking. By stoking the embers of opposition with anecdote and misinformation, fractivists can build outrage that spreads across a community and soon, public policies that handcuff development are built brick upon brick.

Dr. Limerick refers to Peter Sandman, whose seminal work more than 20 years ago is now a model for understanding how public outrage is used to move opinion. Dr. Sandman is best known for his formula: “Risk = hazard + outrage.” In other words, the level of risk that is deemed acceptable for a project is determined by the hazard, or potential for harm, and how much outrage has been ginned up by the opposition.

Dr. Sandman’s book, Responding to Community Outrage, describes how project proponents, such as public officials or industry directors, see risk management in a completely different light than the people who may live near a development.

“The risks that worry the experts” says Sandman, are seen differently than “the risks that worry the public.” Where one sees a “hazard,” something that can be measured and quantified, the other feels “outrage,” an emotional state that grabs onto any bit of supporting information or anecdote, even if it’s flat out wrong.

Under such conditions, listening to the other side is difficult, understanding is nearly hopeless and compromise unlikely. It’s only by recognizing the situation for what it is – what you see and what I see may be quite different – can progress be made.